On Monday, July 25 this year a press conference was held at the headquarters of the National Fund for Environmental Protection in Warsaw, during which the Mayor of Sanok Mr. Tomasz Matuszewski, announced the establishment of the first Local Government Hydrogen Company in Poland. The conference was attended, among others, by: Ms. Małgorzata Jarosińska – Jedynak, Deputy Minister of Funds and Regional Policy, Mr. Akio Miyajima, Ambassador of Japan, and Mr. Maciej Borecki, President of the Board of AUTOSAN sp. z o.o.

As a bus manufacturer, AUTOSAN, which already presented its first hydrogen-powered bus last year, will be an important partner in this project.

At the meeting, Mayor Matuszewski emphasized that in the face of the current crisis and military operations in Ukraine, local energy security is becoming one of the most important challenges. The hydrogen project will also enable the development of zero-emission transport based on local cheap fuel. One of the purposes of the newly established company will be the construction of a hydrogen refueling station.

Deputy Minister Jarosińska-Jedynak pointed out that the establishment of the Company is a great opportunity to create a competitive advantage for the city, the Bieszczady Subregion and the entire Podkarpacie region. She added that the initiative fits perfectly into the trends of European economic policy.

This project will make it possible to use the region’s potential in the use of modern technologies, including for the production of hydrogen buses. In his speech, President Borecki emphasized how important it is for AUTOSAN, a company with 190 years of tradition, to develop the production of this type of innovative vehicles. 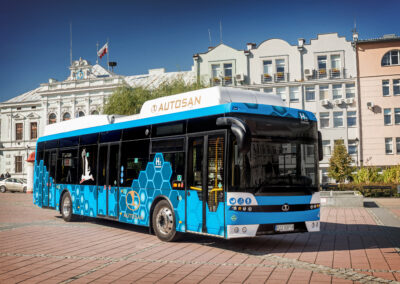 Visit of the Ambassador of Japan

On Wednesday, August 3, the representatives of the Japanese Embassy in Poland, headed by Ambassador Akio Miyajima, visited AUTOSAN sp. z o.o.They were accompanied by the Mayor of Sanok, Tomasz Matuszewski, and the President of the Management Board of SPGK Sanok,...