Visit of the Ambassador of Japan

On Wednesday, August 3, the representatives of the Japanese Embassy in Poland, headed by Ambassador Akio Miyajima, visited AUTOSAN sp. z o.o.They were accompanied by the Mayor of Sanok, Tomasz Matuszewski, and the President of the Management Board of SPGK Sanok, Krzysztof Jarosz. The topic of the visit was innovative hydrogen technologies used in the production of the latest zero-emission buses.The meeting was closely related to the project of the newly established in Sanok, the first Polish Self-Government Hydrogen Company, of which AUTOSAN is an important partner.

Mr. Akio Miyajima was interested in the company’s history and the current activity, which were presented by Maciej Borecki, President of the Management Board, and Remigiusz Śnieżek, Member of the Management Board. The Ambassador emphasized that Sanok and AUTOSAN have a chance to become an example – not only in Poland, but also in Europe – in terms of making efforts to use hydrogen, among others in transport. The talks also concerned the possibilities of developing hydrogen technologies and the challenges that arise in this area.

“The Hydrogen Valley in Sanok is a great opportunity for the region and the companies operating here, including us and our plans related to the production of hydrogen buses,” said Maciej Borecki, President of the Management Board of AUTOSAN.

During the stay in the factory, guests had the opportunity to visit the production hall and learn about the production process of buses, as well as take a short ride on a hydrogen-powered SANCITY 12LFH bus, which they did not spare compliments.

At the end of the visit, the Ambassador saw our historic, iconic SAN and H9 buses and listened to the story about company’s symbol – the stork. 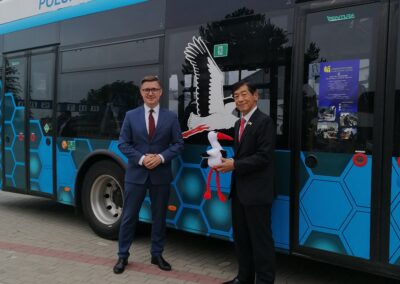 On Monday, July 25 this year a press conference was held at the headquarters of the National Fund for Environmental Protection in Warsaw, during which the Mayor of Sanok Mr. Tomasz Matuszewski, announced the establishment of the first Local Government Hydrogen Company...